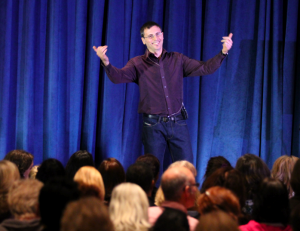 What separates successful people from the people who never quite make it?

It is what they do with their failure.

Do you learn from it? Or do you beat yourself up to the point where you never want to try again?

Successful people learn from their failures. And then they go for it again, equipped with more information that will help them succeed the second or the third or the fourth time.

Here's the short story of a recent epic failure:

Last week, we launched our brand new Client Attraction Mastery Home Study Course. And by our standards, it bombed. We've made over 10 Million Dollars in program sales over the years, so in our minds there is no reason we should have failed.

(And by failed, we mean that our results were 5% of what we projected.) Ouch!

It's been especially painful because Sharla poured her heart and soul into this Home Study Course. It's been her main project for the last several months.

Have you ever created something amazing and then felt so deflated when it wasn't received by the person/people you really wanted to share it with?

Nearly everything in this launch that could go wrong went wrong. There were about five major breakdowns, but the biggest breakdown happened during our webinar.

Our server couldn't handle the volume of people who were trying to get on the call and our participants were getting blocked from getting on the webinar and bumped off the webinar.

In the middle of our webinar, Sharla was furiously texting our team, but her texts were not going through... which distracted me so I was having a hard time forming congruent sentences and probably repeating myself... did I mention I was repeating myself a lot?

Even though we've led over 1,000 events and teleseminars, I STILL have a hard time concentrating when there are major distractions.

So here's what we learned:

1. Don't change everything at the last minute

Two days before the teleseminar, Sharla decided it would be more powerful to do this teleseminar as a webinar. She signed up for a new webinar service and promptly created about 90 powerpoint slides for the presentation. Our team scrambled to make the webinar happen, which led to our mistake of not having enough space on our server to handle the volume of people.

2. Be authentic about your breakdowns more quickly

When the breakdown with our server happened we didn't mention it until we had already lost our flow. Sharing the breakdown immediately would have allowed us to come up with a solution more quickly.

Sharla took several months to make our Home Study Course impeccable. But we didn't put nearly the same amount of time, energy or attention to detail into the launch of the program.

We thought our passion would be enough and that the value would shine through. If we had it to do over again, I would have taken about five additional hours to go through our webinar notes to make sure the webinar was concise and highly valuable and that the offer was crisp and clear.

Bonus lesson: Never do a launch when Mercury is in retrograde. 🙂

We'd love to read your comments below... and if you've had an epic failure, we'd love to hear about it and what you learned from it.

Tell us what you think