Many years ago, Allison Rapp signed up for a VIP Half-Day with us.  It was one of the first VIP Days we had ever done and we were feeling anxious about whether we could deliver enough to and help her reach her goal of making $10,000 each month. 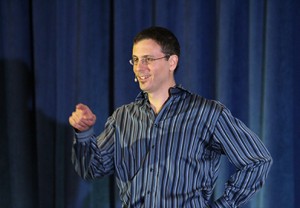 One of our biggest concerns in being able to show her how to build a business that consistently earned $10,000 each month was that her niche was too narrow...

But we were wrong.

Allison learned this the hard way. Fortunately, she experienced a “moment” that created a big shift for her and completely turned her business upside down.

Jesse interviewed Allison for one of our 6-Figure Secrets calls and she is proud member of Thrive Academy’s $10,000 Month Club. She is a very cool person with lots of wisdom and the story of her journey reveals how she went from struggling to easily earning $10,000/month or more, even with a VERY narrow niche.

Read this excerpt from the interview transcript below.

Jesse: Tell us about where you started when you came to Thrive.

The truth was that I just didn’t know anything about how to get clients and so I did what most people do, which is I talked about what I did and it was so exciting to me, and I didn’t understand why people were not jumping out of their skin to be able to work with me.

I didn’t know why I didn’t have clients and I didn’t even really understand that I should be looking for help. I just couldn’t even grasp that anybody would be able to help me or that anything that anybody had as a solution would work for me. I mean the idea of making six figures was like, “Are you kidding me?” I’d be happy to earn middle five. It just didn’t make sense that I could do that with my practice.

Jesse: So what changed for you?

Allison: There were a lot of things in the way but I came for the first weekend at the [Client Attraction Summit] and it changed my life. I remember I had this burning question and you didn’t call on me, so I just yelled it out. I wanted to know how I could make it work when I live in a really small town. You put your thumb and your index finger up to your ear and turned to me and said, “You’ve got to get on the phone.”

And my first thought was “Oh yes, right!” I touch my clients, and that’s going to work beyond the phone, okay sure. But what happened for me was that I began to get it, that although what I was learning from you worked to help me build a private practice, that I could help a lot more people if I worked with practitioners.

That was really the turning point for me and I think it came somewhere during the [programs] of that [year]-- like toward the second half and the second half was that first year. All those programs, I spent a year going back and forth [from Nevada City] to the Bay Area.

But in that process, that was when I really got it, that I needed to change what I was doing because I really wanted to help more people. And so I did, and that’s what I’m doing now, and I worked mostly on the phone with people. I just finished an online program with 40 practitioners from all over the world.

Jesse: What’s the best part of your success?

Allison: I just feel like this is so important, and it’s so much more than what I was doing when I was working with people in a private practice. I loved it, but in terms of my being able to take what I had to offer into a bigger arena, it was really important to make that jump. So I probably will never forget the day that I got so angry with you when you put your little telephone up to your ear.

Jesse: You have one of the most narrow niches of anyone that I’ve ever worked with. And so people have often asked me at Client Attraction Mastery, if their niche is too narrow and I’ve used you as an example of someone who I DID think your niche was too narrow. I’ve told people that even with this narrow of a niche, you’re still doing better than with no niche at all.

Jesse: I’ve been wanting to ask you since I heard that you have had your first $10,000-month, I’m curious if you have stayed with the niche of Feldenkrais Practitioners or if the $10,000 represents you widening that niche?

Jesse: How many Feldenkrais people are there in the whole world?

Jesse: So you’re doing really well just with Feldenkrais Practitioners. And so I just want to stress that point, I think that’s a huge point because so many people worry that their niche is going to be too small and so this just goes to show as long as you could say there’s at least 10,000, there probably would be more but at least 10,000 potential clients that you have in your niche then it might not be too small.

Allison mentors hands-on holistic practitioners around the world to make a bigger impact and get paid what they’re worth. She regularly has $10,000 months and is doing what she loves!

Now you have to understand that Allison came to us as someone who brings more than three decades of experience as a hands-on practitioner!  It just goes to show you that you can be really gifted, really experienced and really wise...but not be successful without the skills you need to grow your business.